Possessing a history both sordid and bizarre, the Brooklyn Bridge is a fascinating landmark that has been facilitating transportation and skyline views since 1883. We recently named it the best bridge in New York, and for good reason. This bridge is more than just a land connector. It’s a living, breathing link to the past. Our timeline explores the origin, tragedies, and ingenuity that shaped one of the United States’ most iconic structures. 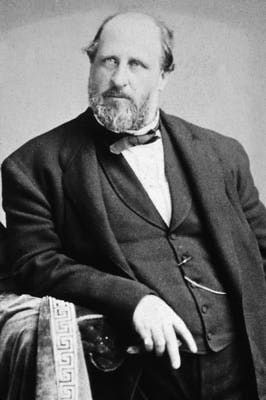 The Brooklyn Bridge was planned by veteran bridge engineer John Roebling, an immigrant from Prussia. Enthusiasm for the idea was not shared by all in the city government, and so Roebling enlisted Tammany Hall kingpin William “Boss” Tweed to help secure funds. Documents showed that Tweed paid out over $60,000 in bribes to secure a $1.5 million bond for the bridge’s construction. After many delays and redesigns the project was ready to launch in 1869.

Once the contract was granted, Roebling got to work. In June of 1869 he was conducting preliminary surveys when a ferry crushed his foot against a piling. His toes were swiftly amputated, and as a result, developed tetanus. He died on July 22nd, just 28 days after the injury and 14 years before the completion of the bridge.

A Bridge With a Body Count

The construction of the bridge featured scenes that would have fit in any Final Destination movie. Workers were maimed, crushed, bludgeoned, and succumbed to falls from over 200 feet. If that weren’t bad enough, countless others suffered from “the bends“, a phenomena where rapid pressure change causes nitrogen in the blood to bubble. This resulted in three deaths and the permanent impairment of Roebling’s son (who took over the project).

It Was An Engineering Marvel

At the time of its opening on May 24th, 1883 the Brooklyn Bridge was the first Steel Wire Suspension Bridge in the world. It featured a span of over 6,000 ft and included 19 strands comprised of 5,434 steel wires. These wires took over two years to construct due to the tediousness of assembly. It was deemed safe by the city, although that reputation wouldn’t last long.

Just one week after its inauguration, the bridge hosted 20,000 people for a Memorial Day celebration that quickly turned tragic. Chaos ensued when a woman fell down a staircase, resulting in twelve casualties and dozens of injured bridge-goers. The city was shook, and so too was the reputation of their new bridge.

The Greatest Show on Earth (on a Bridge)

The very first day saw the prices as follows:

In 1891 public pressure ended the foot traffic toll, and 20 years later all tolls were removed from all New York bridges (including the Williamsburg Bridge). This has given New Yorkers and tourists from all over the world free access to one of New York’s most enduring landmarks for over one hundred years.

A Timeline of our Brooklyn Bridge Facts

A Bridge is Born

Many workers died during the Brooklyn Bridge’s 14 year construction. Estimates range from 20-50 casualties.

Just one week after the opening 12 people are killed in a Memorial Day stampede caused by overcrowding.

Circus tycoon PT Barnum puts the strength of the bridge on display with a parade of elephants.

For Whom the Bridge Tolls

Today, the Brooklyn Bridge is one of the few free attractions in NYC. But for the first 8 years of existence this wasn’t the case. You could pay as much as 10 cents to cross the bridge.